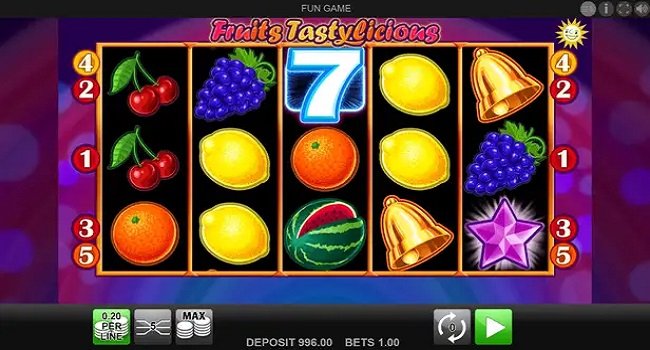 Fruits Tastylicious is a fruit-themed and retro style graphics based slot game for which reels and Paylines are 5.

The game is developed by Merkur Gaming which is a leading online slot developer company.

This game is a bit like land based slots which are very popular among players because of their classic symbols.

Other symbols can be seen on the reels of this slot includes the golden bell, a blue seven, a wild logo and a purple star scatter symbol. Fruits Tastylicious is a beautifully designed slot game which is playable with mobiles, personal computers as well as with tablets.

The starting coin size that you can use to play this Merkur Gaming slot would be $0.0 per spin and the maximum coin size is $5 per spin.

The game has a reward of 3,000x times of your bet size as their jackpot prize which is triggered during the free spins.

This game has an RTP of over 96% which means this can be played nicely.

If you with to play this slot for fun or for real money then you may take a look at best Merkur gaming casinos. Merkur gaming is one of the best igaming company that deals in video slots.

The same company has developed several slot games till date and this new one named as Fruits Tastylicious is an awesome one.

You will feel like playing at a land based casino while playing this video slot from the house of Merkur.

The maximum possible winning amount is also good and it resides at 3,000x times of your bet size.

It means if you are playing with the highest existing stake of $5 per spin, the maximum winning amount will be a decent one.

The Blue Seven symbol is the most rewarding symbol of this game which offers 600x times of your stake if you land 5 of a kind on your reels.

The game also has a wild symbol that can expand throughout the reels and would deliver great results.

However, the wild symbol will only appear on reel 2, 3 and 4 and would expand to offer you cash prizes.