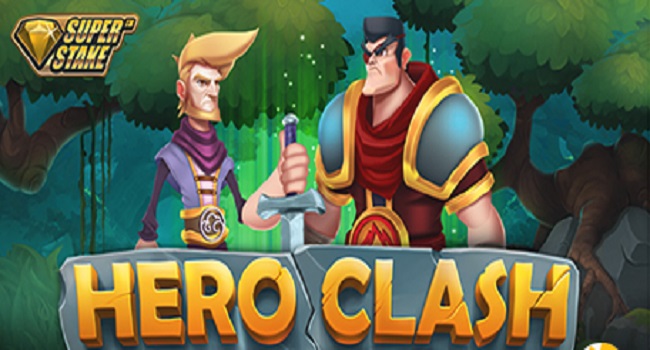 Hero Clash is a new mobile slot game of 5 reels and 243 Ways to win developed by Stakelogic which is a premier iGaming company that creates video slots.

This is an adventurous themed video slot which is accessible through all devices such as desktop, laptops, computers, tablets or mobiles.

A mysterious forest can be seen in the background of this game which gives immense pleasure to players because of the graphics.

The soundtrack and playing arena are simply outstanding.

The game could get you a whooping up to 5,000x times of your stake as highest Payout in a single spin. Meanwhile the return of player percentage of Hero Clash ranges from 89% to up to 98%.

It means you would have great chances to land a winning combination while playing this slot for real money.

This adventure slot not only has a whooping Jackpot win bit it also features wilds, scatters, bonus symbols, free spins in 4 different phases, a Gamble feature as well as a Super Stake feature.

The game contains 4 wild symbols in the form of a bow with an arrow, a sword and 2 red and blue magic balls. Other Symbols of this slot are low paying A to 10 royals which offers a decent prize.

The game also has 2 male and 2 female heroes.

Landing 3 or more bonus scatters will trigger the free spins feature and players would get an initial 12 free spins along with 2x multiplier.

A meter is located in the sides of the reels which contains all the heroes and their winning combinations.

The wild symbol will replace other symbols to give you a winning combination. The charger is also their which will give you a sticky wild in the middle of the reel with 1x to 5x multiplier.

Stakelogic is known to develop online slots that are great. You can take a look at different stakelogic online casinos to play stakelogic slots.