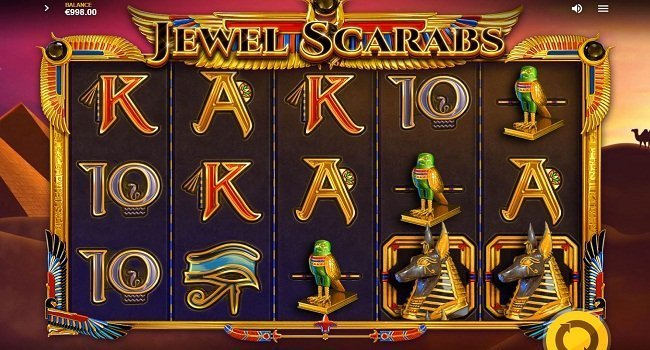 The company is an achiever who develops best video slots and in addition to that they have arrived with another new video slot named Jewel Scarabs.

Jewel Scarabs slot game is a 5 reels and 9 paylines machine which is easily accessible through all of your devices including mobile phones and tablets.

Jewel Scarabs slot is inspired and based on Ancient Egypt civilization and hence you would see some related symbols on the reels. Some of them are low paying symbols and some of them are high value symbols.

The RTP of this game is not that good but it stands at 95.77% which is above good percentage.

The game contains Scarab symbol which acts as wild as well as scatter symbol. Like whenever it would act like a wild then it would replace other symbols from the reels except the scatter and will create good winning combinations for you.

You will hit the jackpot bonus feature if you have 5 of these Scarab symbols across your payline.

The same Scarab symbol will act as scatter symbol which get you free spins and bonuses. Landing at least 3 or more of these Scarab symbols anywhere on your reels will trigger the Golden Spins and that feature could get you very good results because they do not apply any upper limit of multiplier during that period of time.

This is bit an old themed slot game which contains wilds and the scatters as well as the Anubis icons symbols which would turn your jackpot feature on.

Some other high paying symbols rather than Royals are Eye of Ra or the Falcon as well as the Baslet.