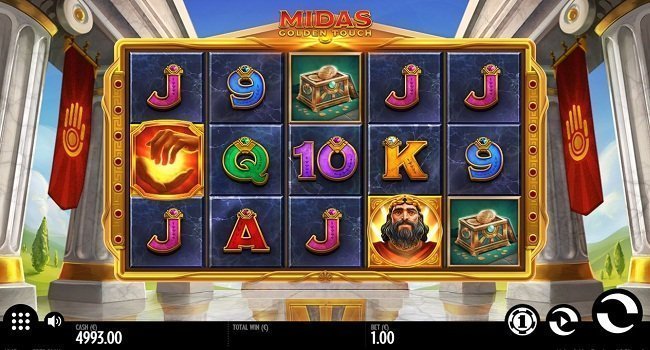 Midas Golden Touch is an online slot game inspired by legendary King Midas who turns anything in gold by touching it. This may be fun and exciting but ultimately it’s very painful for the king.

Midas Golden Touch slot is a 5 reels and 15 Paylines video slot powered by Thunderkick gaming for which coin sizes are 10 to up to 100 per spin.

The game has a jackpot of 75x of your stake and with an RTP of 96.10%, this game is playable across every single device including tablets and smart phones (Androids or iOS).

Midas Golden Touch video slot is set in a backdrop of a temple where you will see some high paying symbols and some low paying symbols.

The Godden Touch is the wild and the temple is the scatter in this game. The wild symbol will replace all other symbols on your reels except the scatter.

The game comes with great wilds multipliers. One wild on reels will get your winnings doubled and just like that Land wilds on reel 2, 3, 4 or on reel 5 and you will receive 4x, 8x, 16x or 32 times of your stake respectively respectively.

As mentioned, the temple is the scatter and land 3,4 or 5 of these symbols anywhere on your screen and you will hit the free spins feature to receive 10,15 and 20 free spins respectively. You could also get a chance to ‘respin’ during this period of time.

Midas Golden Touch mobile slot is an awesome slot game from the house of ThunderKick gaming limited and you can play this game using your mobile phones or desktop with good range of coin sizes. This game offers you good amount of cash prizes with good RTP.