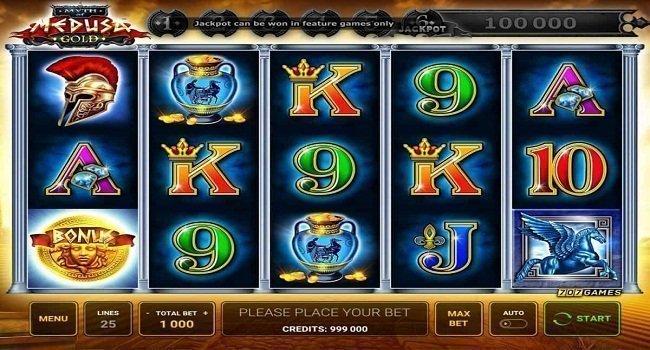 According to the Ancient Green Mythology, Medusa was a monster and described as a female human being who lived with venomous snakes in her hairs and anyone who looked in to her eye was destined to become stone.

This theme is very popular for online slots and hence most of the online gaming companies have developed video slots using Medusa as key character.

The latest slot machine based on Medusa is named as Myth of Medusa Gold which is powered by Greentube Gaming and comes in with 5 reels, 3 rows and 25 Paylines.

Myth of Medusa Gold slot is playable across all devices including smart phones. The game features free games feature a jackpot feature as well as the gamble feature.

The game possesses 2 wild symbols and one of them is the Medusa herself. The wild of this slot will replace other symbols from their places except the bonus symbols and creates winning combinations.

The wild is the most rewarding symbol of this game which pays you 3.2x of your stake for 5 of her symbols across your payline.

You will see many other symbols on the reels including A to 9 playing cards, a blue and a green horse, a knight and a knight’s helmet.

The blue vase and the knight’s helmet are the second most rewarding symbols of this game. They pay you 1.6 times of your stake for 5 of a kind on your reels.

Free Games Feature- The mirror symbol is the bonus symbol here in this game and landing 3 or more of the mirror symbols across your active payline will let you trigger the free games feature.

The game also features a ‘Gamble feature’ which should be used by player’s caution. In this feature, you will have to choose the colour of the next card and if you are right then your winning will be doubled.

You could also win jackpot if landing 6 jackpots on reels 2 and 4 during free games feature.