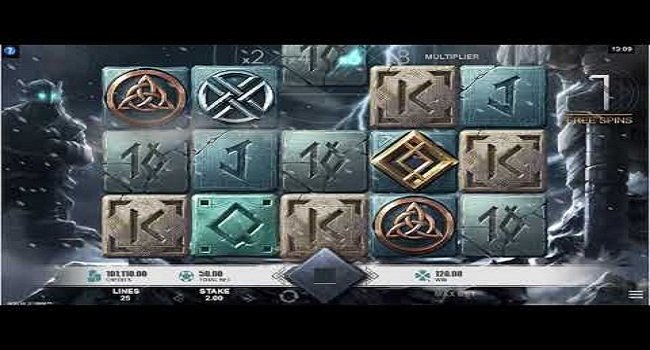 North Storm is a Rabcat based slot game that has some incredible graphics, playing environment as well as background soundtrack.

This is a 5 reels and 25 paylines slot game which can be played at various devices with initial starting betting size of just $0.25 per spin to a maximum $50 per spin.

The RTP for this game is 96.13% and maximum possible payout could be 1,000x times of your stake. North Storm is a Nordic themed slot machine which covers a lot of bonus options such as Bonus Falls with up to 8x of multipliers, Dire Wolf wilds, Warrior scatters and free spins.

North Storm Online slot comes in with a lot of bonus features including the image of a Dire Wolf wild symbol that replaces other symbols on your screen to form a winning combination. A series of wilds on your reels will offer you great payouts.

This is a great feature which lets you win initial 1x, to 2x, 3x to up to 4x of multipliers. The free spins will offer you 2x, 4x, 6x and 8x of multipliers in this feature.

The Warriors are the scatters and landing 3 or more of them will activate the free spins feature and you will get 8 free spins initially. The multipliers will be doubled in this feature and Bonus Falls values will also applies during this period of time.

North Storm is very impressive slot game which is inspired by Viking/Nordic mythology and is developed by Rabcat Gaming Limited. The game also offers great bonuses and a very handsome maximum possible payout.