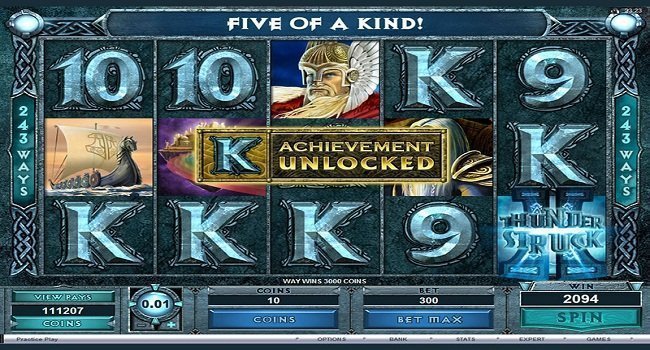 Thunderstruck II is a video slot powered by Microgaming Limited. This is a very popular online slot game which offers great bonuses and free spins.

Thunderstruck II is a 5 reels and 243 Paylines(ways to win) slot game which is playable at mobile phones, tablets or with personal computers with starting coin of 30p per spin to up to €£15 per spin.

This slot offers a jackpot of 1,000 times and features 8 different Bonus Rounds.

The Free spin feature of this slot machine would give you 10 to 25 free spins along with up to 6x of multiplier.

Thunderstruck II slot is themed on Norse mythology and hence based on Nordic gods such as Odin, Thor, Valkyrie and Loki.

The slot has an epic background soundtrack which attracts players in real manner. The symbols of the game are A,K,Q,J and 10 with 9 playing cards as well as these Nordic gods (Valhalla, Valkyrie, Loki, Odin, Thor and viking longships).

The slot i.e. Thunderstruck II logo is the wild symbol and it replaces all other symbols on your reels except the Thor’s Hammer (the scatter symbol of this game).

You will win 33.33 times your stake, if you land 5 of wild symbols on your active payline, while 4 Thor symbols along with a wild on your reels will get you 33.33 times of your stake.

There is a Wildstorm feature available in the game which can be triggered randomly. During this feature, all your reels will turn wild and you would win a whooping 1,000 times of your stake.

Thunderstruck II comes in with many different features. The free spin feature is triggered when you land 3,4 or 5 scatter symbols on your reels.

Valkyrie feature – This feature will give you 10 free spins along with 5x f multiplier and the beauty of this feature is that it can be re-triggered.

Loki feature – starts with 5th trigger and then you’ll Get 15 free spins, if activated. You would get more free spins if re-triggered.

Odin feature – You would get 20 free spins and this feature is available from 10th trigger. Up to 6x of multiplier is also applicable with all winnings.

Thor feature – Enter in to The Great of Hall of Spins and receive 25 free spins along with the Rolling Reels feature which says if you land a winning combination then all your winnings will be doubled and it will increase in next spin to 3x,4x and 5x.

Thunderstruck II is an awesome slot machine which is empowering real money slot lovers with a lot of great bonus features, free spins as well as multipliers.

You can win a maximum of 12,150 times your stake on every free spin during the Troy feature. You can also take a look at Immortal Romance slot if you love to play Vampire and those kinds of themed slot games.