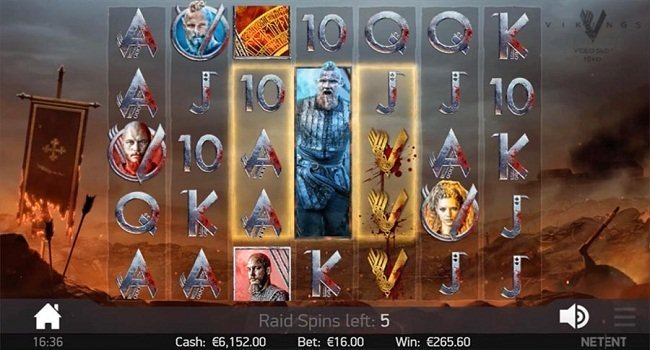 Vikings slot is a Net Entertainment based game which can be played using 5-7 reels and with 243 to 78,125 Paylines.

Vikings is an incredible slot machine playable at either mobile or personal computers with starting coin of 25p per spin to up to €£100 per spin.

There are 3 Bonus rounds exist in the game and most of them come in during base game. The Free spin feature would give you 7 free spins, while a jackpot of 607 times could also be won by players during the game.

Vikings slot also comes-in with a Hotspot feature where you can see a fully stacked Vikings symbols landing on the reels and rest of the Viking symbols will turn in to winning combination.

Vikings is a popular slot game based on a TV show. You as a player will be taken to the old Norse place with weapons where You would see symbols such A, K, Q, J and 10 royals along with many Vikings characters such as Ragnar Lothbrok , Floki, Bjorn and Lagertha.

The symbol ‘V’ is the highest paying symbol in this game which pays 7 times on players total bet if they land 7 of these symbols across a Payline.

As mentioned, this game comes in with a Hotspot feature. It means, if you land any one Viking character like Floki, Bjorn, Lagertha or Ragnar fully stacked on reel 3 then this feature takes place.

In that case all other Viking symbols will transform in to that landed symbol and that would help you to win big.

For these 3 symbols you could get up to 27 times on your total stake, while more would get you a maximum of 243 times of your total bet.

This feature would take place when you land 3 Raid Spins symbol on your reels and in that case you will play on 7 Reel, 5 row and with a whooping 78,125 Paylines(ways to win), which could make your winning a massive one indeed!