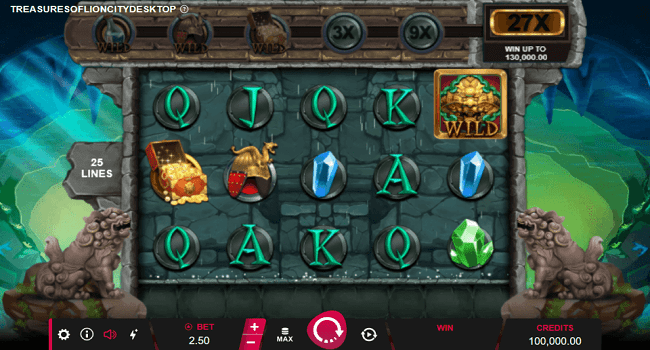 Microgaming and Pulse 8 Studios presents you a new online slot game named Treasures of Lion City which takes place with 5 reels and 25 paylines and is accessible through every single device including smart phones.

The initial betting size for this slot is $0.25 per spin and the maximum could be $50 per spin. This game is inspired by submerged city in China which allows you to take home 2,600x times of your total stake or a handsome amount of $130,000 for a single spin of yours.

Because of its impressive and attractive graphics this game of Treasures of Lion City looks very pretty on devices like desktops, tablet as well as on smart phones. Though this game is very nice on the sets but it is disappointing that the RTP for this slot is a bit low and it stands at 94.20%.

The Treasures of Lion City is a medium volatile slot game which comes in with wild symbol and the Rolling Reels feature.

The Gold Lion is the wild symbol here which replaces other symbols from the screen and let you for a winning combination if you land 5 of these wild symbols on your screen. You can win 20x times of your stake during this period of time.

You know that this feature is also known as cascading reels feature which could get you 3x to up to 27x times of your stake if you are having a good day.

As mentioned, Treasures of Lion City is a Chinese themed game and hence you will see many related symbols on the reels such as low value Royals, a warrior helmet, a treasure chest and the Gold Lion which is the wild here.