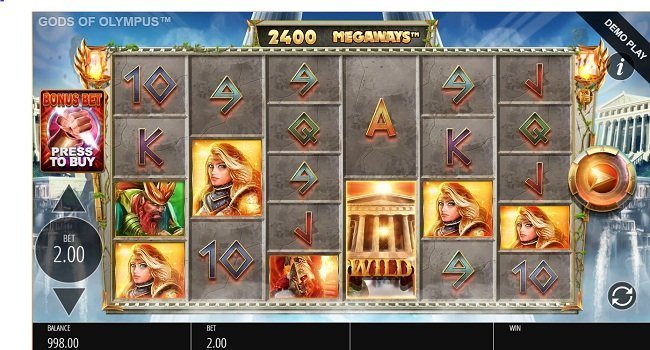 Blueprint gaming is one of the most popular iGaming company that have already developed some of the most entertaining online slot machines for internet casino sites.

Now, the Blueprint gaming is coming with another video slot named Gods of Olympus Megaways which is based on Ancient Greek gods.

Gods of Olympus Megaways is a slot game that comes in with 6 reels and 15,625 Ways to win (Paylines), where you will see Greek god’s symbols on the reels such as Zeus, Athena, Poseidon and a warrior symbols.

You can play this Greek mythology based slot game using betting sizes of just $0.10 to $10 per spin with your smart phones, tablets or computers.

You already know that, there are a lot of online slots being developed on the theme of Ancient Greek mythology and hence checking out another slot game with the same theme can be a bit boring for you but not in the case of Gods of Olympus Megaways.

This latest slot from the house of Blueprint Gaming is an awesome one. The graphics, the background soundtrack, the playing arena, the view point, scatters, wilds and many great features of this game will not let you go anywhere else.

The RTP for this medium to high volatile slot game stands 96.03%.

This game features regular as well as random wild features. The Thunder Modifiers can be triggered at any point of time during your gaming.

You will receive free spins via 4 different variants and each of them will get you s different type of extra feature.

Please take a look at these 4 different free spins features.

Almighty Wilds Free Games: This free spins feature will reward you 2x to 3x of wild multiplier. You can also get a massive 625x multipliers during this feature combined.

Rise of Olympus Free Games: an unlimited win multiplier will be added during this feature.

Colossal Free Games: This feature will take on with a roaming wild option.

Wild Storm Free Games: The middle 4 reels symbols will turn in to wilds via Thunderbolt.