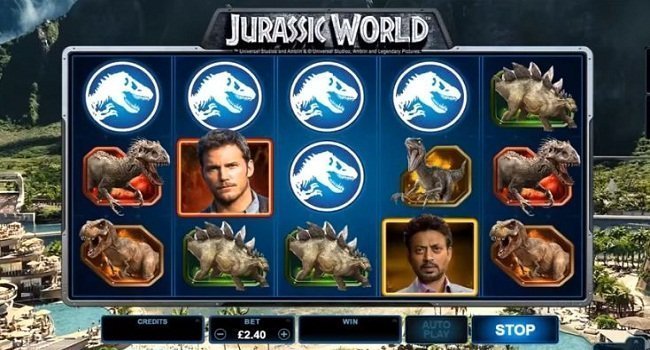 Jurassic World is an adventurous video slot game powered by Microgaming that comes in with 5 reels and 243 Paylines.

Coin range for the game starts from 30p per spin and it can go up to €£7.20 per spin. You can play this online slot using your mobile phones, desktops or tablets using any microgaming casino site.

The game is a powerhouse, when it comes to paying their customers. It offers you a jackpot of 3,000 times of your stake and includes 4 Bonus feature including free spins feature that yields up to 15 free spins along with up to 7x of multiplier on all your winnings during free spins.

You will see 6 dinosaurs’ symbols on the reels of the game such as Ankylosaurus, Tyrannosaurus, Velociraptor, Pteranodon, Tyrannosaurus and Indominus).

As this slot is based on a ‘Big Hit Hollywood’ movie named Jurassic World (released back in 2015 and became the 4th highest grossing film of all time) it contains original or 4 characters from the movie and they are Claire Dearing (Bryce Dallas Howard), Owen Brady, Vic Hoskins (Vincent D’Onofrio) and Simon Masrani (Irrfan Khan).

The Jurassic World logo is the wild symbol in this game which replaces all other symbol on your reels except the scatter.

The wild would appear stacked in this game and that means increased chances of winning combination and winnings. 2 Scatter symbols appearing during the base game would become wild symbols.

The game includes plenty of bonus features such as Indominus feature, Free Spins feature and many others.

This feature is triggered during the base game and gives you 3 to 5 times of your total bet while if you are lucky to land Indominus Rex Symbol then you could win up to 1,000 times of your stake.

You will trigger the free spins feature and will get to explore 3 different locations if landing 3 or more scatters anywhere on the reels. These 3 locations are-

Gyrosphere Valley – 10 free spins along with 2x of multiplier

Creation Lab – You will again 10 free spins with Rolling Reels. In a winning combination contributing symbols will be removed and new ones will take place.