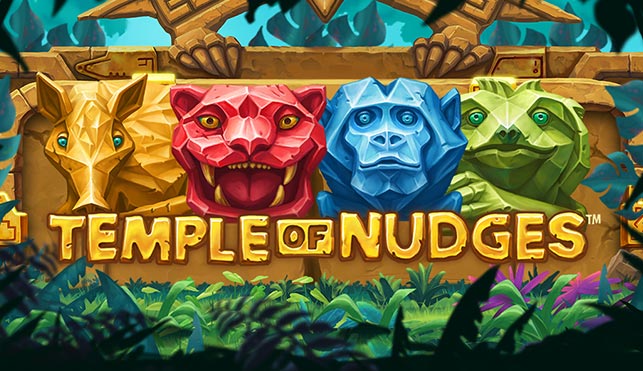 Temple of Nudges is a mystical themed video slot powered by Net Entertainment that comes with 5 reels and 243 paylines.

Coin sizes for this Aztec inspired slot machine can be from 25p per spin to up to €£250 per spin. The game has a jackpot of 2,187 times of player’s stake and it contains 2 Bonus Rounds.

The free spin feature of this video slot by NetEnt gives you 8 free spins and it is playable across all platform including mobile and tablets.

The two features of Temple of Nudges slot are the Nudge feature and Re-Spin feature. This game is set deep in the jungle where you will hear the birds singing.

The reels of the game has many different (low paying and high paying) symbols such as towers, cougars, slots, snakes, birds, armadillos, monkeys and low suns.

The cougar is the highest paying (most rewarding) symbol of this game that pays you 3,6 and 9 times of your stake if you land 3,4 or 5 of these cougar symbols across your payline.

This feature is triggered when the Re-Spin overlay appears on a symbol in a winning spin. This feature could get you a re-spin which can make you win 87.5 times of your stake on a single spin.

Though, this online slot from the house of NetEnt is good but it is not that good like one of their most played slot named NetEnt’s Vikings, which is based on the TV series that pays you out a whooping 10,000 times of your stake.