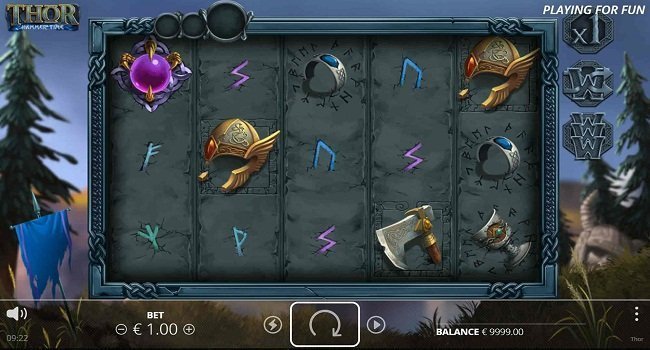 Thor Hammer Time is a new online slot game powered by No Limit City. This is a 5 reels and 20 Paylines video slot game that contains 5 Bonus features including the much weighted free spins feature which allows you to play with 5 free spins along with up to 4x of multiplier.

The game provides you a jackpot bonus of 300 times of your stake for matching wild symbols on your screen.

You can play this Norse-themed slot from the house of Nolimit City with betting sizes of $0.10 per spin to up to $200 per spin using your tablets, mobiles phones or computers.

This game is being set in the backdrop of woodland where you will see 5 low value symbols and 5 high value symbols including the warriors’ helmet, a ring, an axe, goblet and the gold hammer which is the most rewarding symbol of this game that pays you 0.75, 3 or 15 times of your bet for 3, 4 or 5 of these symbols on your reels.

Rune Raze feature- This feature, if activated will turn your rune stones symbols in to matching symbols and this can happen on any random spin.

Hammer Time feature – During this feature the high value symbols will turn in to top paying symbols.

Scatter Energy Collect feature – Landing 2 scatters on reels will get you a respin and landing  3 scatters to trigger the Asgard Spins feature .

Asgard Spins feature – This is a great feature where the most paying symbols i.e. the Thor might land on reel 5 and trigger extra bonus.

This No Limit City mobile slot could get you access to 1200 times of your stake. Of course if you are playing with real money and with a 300x of your stake with a multiplier of 4x becomes 1200x of your bet.