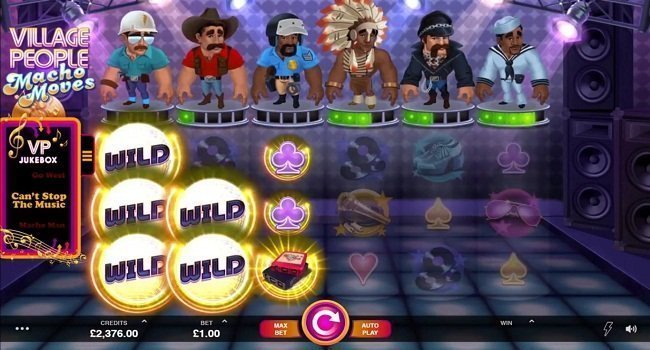 Village People Macho Moves is a Microgaming based online video slot machine that comes in with 6 reels, 3 rows and 15 Paylines.

Betting sizes for this slot machine ranges from 20p per spin to up to $25 per spin.

The game comes in with VP wild feature as well as Free Spins Feature, expanding wilds and a token collection feature that triggers 1 out of 6 free spins feature.

You can play Village People Macho Moves slot using your mobile or desktop for free or for real money at any Microgamimg casino site listed by casinovizz.com.

This slot is based on an American disco group Village People who were world’s most entertaining band at the era of disco’s heyday and at that time they created some awesome dance hits such as Y.M.C.A, Go West, Macho Man, and In the Navy.

Every single release by them is available in the Jukebox which is located just left side of the reels. As mentioned earlier, you can play this slot using betting ranges of 20 cents to 25€ per spin at any Microgaming online casino.

This iconic slot machine is set on a disco set where you will see 6 of the main character of the band. You will also see some high value and some low value symbols on the reels such as sunglasses, dancing boots, microphones, cassettes as well as vinyl records.

These 5 symbols offer you same payout i.e. 6 times of your stake for 6 of these symbols across your payline.

The game also features a wild symbol that replaces all other symbols on your view area except the bonus and would help you to create/form winning combinations.

VP Wild symbol- If this symbol appears during base game then you will trigger the VP Wild feature which would stack on the reels and could even get you 6 reels on board.

VP Wild Meter- 5 tokens will fill this meter and will get you an initial 5 free spins long with any 1 out of these 6 features.

The reel 1 is the Construction Worker which gives you a multiplier of 2x and 20x.

The Cop is the reel 3 and it will give you 2 to 4 stacked wilds.

The reel 4 is for the Native Indian which starts with fully stacked wild and move 1 position left on every single spin.

The Biker is the Reel 5 and it replaces low value symbols to high value symbols. Meanwhile the sailor is the reel 6 which adds 1-3 wilds on your reels randomly on any position.